What are pentatonic scales?

While you explore different types of scale on the piano, you will realize that each scale is constructed and played differently.

If you should play the black keys on your piano keyboard starting from the F sharp key and ending at D sharp within one octave, then you would have played a pentatonic or five note scale.

Why not give it a try? Play it on your keyboard and lah the melody it creates. Here are the keys that you will use. F#, G#, A#, C#, D#. The pentatonic or five note scales are used in melodies mostly from the east especially in China, Korea, Japan, India and East Africa. However, there have been many contemporary musicians and composers from all over the world that use this type of scale in their music today.

There are two basic types of pentatonic or five tone scales and as a pianist it’s your duty to practice them. They are the major pentatonic and minor pentatonic.

A major pentatonic or five note scale can be constructed from a major scale by using a simple formula. 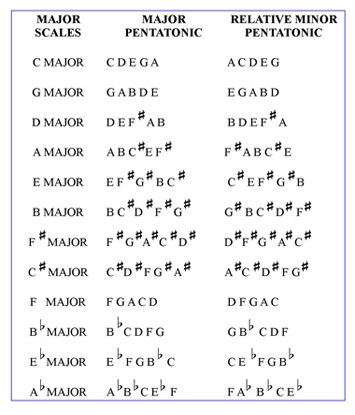 TAKE A LOOK AT SOME OF OUR LESSONS ON PIANO SCALES!

Playing Blues Scales on the Piano

Leave the pentatonic scale page and return to home page.