The Letters of the Piano Keys

On this page we are going to explore the letters of the piano keys.

FINDING THE LETTER NAMES OF THE WHITE KEYS

Finding the letter names of the keyboard is easier than one thinks. The steps below should help you remember them for the rest of your life. This activity will give a clear guide in finding the letter of each white key.

ACTIVITY – The following steps will do a great job in helping you to find the letter for each key on the keyboard.

STEP 1 - To the immediate left of every set of two black keys the white key is "C".

STEP 2 - To the immediate left of every set of three black keys the white key is "F".

The illustrations below should help you.

The black keys are circled in there groups so that one can understand what is mentioned in the two steps above. 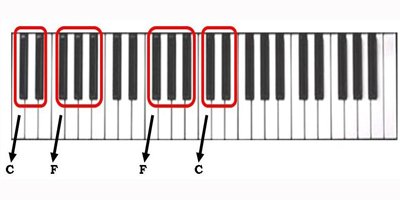 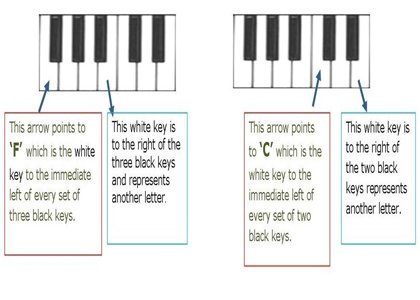 Now that you are able to identify the keys "C" and "F" on the keyboard it is now time to find the other letters. The letters we need to locate are A, B, D, E and G. Please note that there is no "H" in the musical alphabet.

Here is a diagram showing all the letters of the white keys, the keys of "C" and "F" are highlighted.

FINDING THE LETTER NAMES OF THE BLACK KEYS

The black keys on the keyboard are called sharp or flat keys. This means that one black key can have two letter names.

The illustration below should explain further. 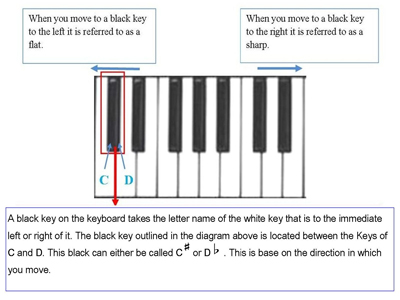 The black keys are called enharmonic keys meaning that a black key has two names. The illustration below will give clearer explanation.

The diagram below covers the letter names for all the black keys on the keyboard. 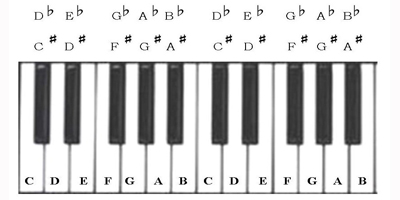 Like the natural keys the letter names of the black keys are repeated.

You have just accomplished one major task. That is, finding the letter names of the piano keys. There is one important point that you should keep in mind. There are 12 keys on the piano, and both black and white keys are included in the number.

This means that you should not be confused when you see the large number of keys that are spread across your keyboard.Just remember that the 12 keys are repeated.

Here is a summary of the 12 keys that are on the piano keyboard.(Remember that one black key can be called a sharp or flat.)

You now know the letter names of all the piano keys, it is very important that you study and practice them.

Click here to leave the piano keys page and return to home page. 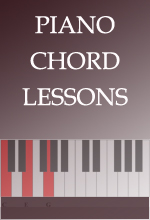 What is the Piano Keyboard?

Playing the Circle of 5ths
on the Piano