Playing Slash Chords
on the Piano

Hi! Welcome! On this page you will learn about slash chords or compound chords.

By now you should know how to construct and play basic chords such as major and minor triads. It is very important that you know as much as possible about basic triads before you attempt to use other chords, especially the ones that are more advanced.

If you are not confident that you are ready to move on to other chords that are more advanced than basic triads, then click the topic which suites you best below. If you are in the process of starting your first lesson on piano chords, then click here.

Other lessons on piano chords

What is a Slash or Compound Chords?

A slash chord is formed when you play a common chord such as a major or minor triad with an additional bass note that is different from the root.

For example – C is the root of the C major chord and is normally played in the left hand to accompany the C chord (CEG) in the right hand. However, if you should play the C major chord along with E in the bass (left hand), then a slash chord is formed.

Slash or compound chords are used mostly in popular music such as jazz, blues, gospel, souls and so on. These chords however, have a unique sound and are used to complement certain chord movements within the music. These types of chord also create a sound like that of a 1st inversion of a major triad.

There are three slash piano chords that are used by most musicians especially in popular music. However, before you attempt to play these chords, it is very important that you know how they are constructed and how to apply them to each major scale.

These three slash piano chords are as follows;

So if we should apply these three slash chords in the key of C major on the piano, then the results would be as follows;

Here is a chart illustrating the twelve major slash piano chords that can be played on the piano. 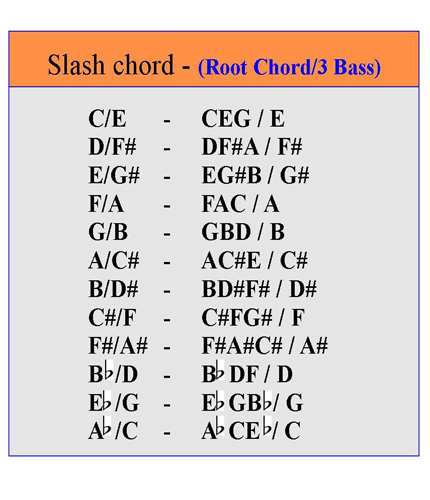 As you learn to play basic chords on your piano, you will find out that there are other chords that you must learn in order to become a good piano player.

Click here to leave the slash chords page and return to home page!