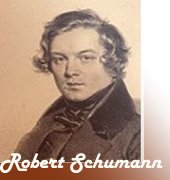 Robert Alexander Schumann is one of the many composers who wrote most of his compositions for the piano. He began his musical career at the age of six learning to play the piano. By age seven Schumann was officially taught music theory and piano lessons by Baccalaureus Kuntzsch. His love for music grew and so he started to compose a number of minor pieces during his childhood.

As this young pianist and composer continued to develop, he showed some interest in the works of Ludwig Van Beethoven, Franz Schubert and Felix Mendelssohn. His love and talent for music was not appreciated by many of his close friends and relatives but his father was very supportive of his musical interest.

By age sixteen (16), Schumann’s father died. He was encouraged to go to law school by his mother and other guardians who did not appreciate nor support his musical talent and a career in music.

Schumann’s love for music never faded, and so after he finished law school, he started studying music again. By 1830 he went back home and started to take piano lessons from Frederic Wieck. At this point he was aspiring to become a virtuoso. It seems though that Schumann’s dream of becoming a great concert pianist was not going to come through. He suffered an injury to his right hand; this was in his early twenties. However, he never gave up and started to place a lot of emphasis on piano composition.

Consequently Schumann composed a number of pieces during his 20s and was able to perform some of them at public concerts.

Robert Schumann was not totally a music addict; he was also in love with Wieck’s daughter Clara. Clara Wieck was also a piano player. She was a great concert pianist before the age of 16. She too loved Robert, but her father Frederic Wieck opposed their relationship and refused to give her up in marriage to Schumann arguing that she was under- age.

On September 12, 1840 Robert Schumann married Clara Wieck. This was after a long legal battle between Schumann and Frederic Wieck about giving consent for Clara to marry him. The union bore several children. As a result Frederic Wieck developed a good relationship with Schumann again because of his love for his grand children. Despite having a lot of children, Robert and Clara did not give up concert performances and tours, they even became more famous.

Schumann went through some rough times in his life and attempted suicide a few times. His mental and physical health deteriorated causing him to have strange dreams and hallucinations. In 1954 Schumann attempted suicide again by trying to drown himself in the Rhine River, but he was recued by a boatman.

Schumann recognized that he was very ill and decided to go to a mental institution.  He died about two years after.

No doubt Schumann was a great composer. His compositions are placed into four categories. They are piano, choral, orchestra and vocal works.